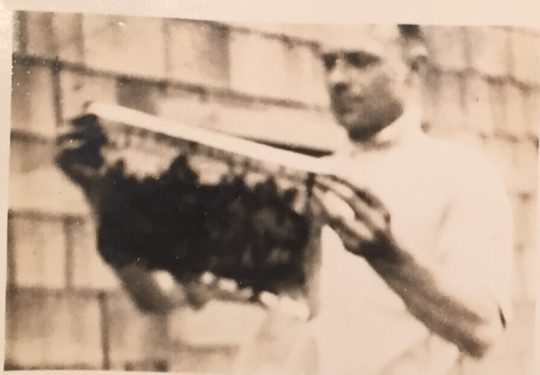 The association was founded in 1964 by Commander Edgar Royal Mumford, USN, with the help of Reverend Glenn Clulow, Ken Townsend, Arthur Holmes, and William Harvey. Commander Mumford served as president of the Maryland State Beekeepers Association from 1968 to 1969. He later started the honey booth at the county fair where the Commander Mumford Perpetual Trophy is awarded annually to the best honey exhibit at the fair.

During the early years, the initial group of about a dozen members met in their homes. It was a loosely knit organization not inclined toward formal organization or note taking. The objective was to learn from each other and to enjoy the hobby. CDR Mumford was born in West Jordan, Utah in 1898 in the land the pioneer Mormons called "Deseret," which means "honeybee". Although he left Utah before he was one year old, he lived up to his Utah heritage by pursuing apiculture as one of his first jobs in 1915 while growing up in Washington State. He worked 60 hours a week for a beekeeper who advertised: "LEARN THE BEE BUSINESS AND GET PAID FOR IT." He received $15 a month helping to care for 100 colonies of bees in the Yakima Valley of Washington State.

But his career was interrupted twice; first by World War I when he served as a radio operator. After the war he finished high school and took out a homestead on the slopes of Mt. St. Helens. After obtaining the title he sold the land to finance his college education. After graduating from Willamette University in Salem, Oregon, Mr. Mumford taught math and science at McMinnville High School in Oregon from 1928 to 1941 and resumed his hobby as a beekeeper. Then during World War II he served as the Officer-in-Charge of the Naval Radar School at Mare Island Naval Base in Vallejo, California.

In 1944 Commander Mumford was assigned to Annapolis where he served as a professor in electrical engineering. In Annapolis he was able to once again pursue his hobby of beekeeping. He specialized in the three-brood chamber method, which he described in the September 1978 issue of the American Bee Journal. Earlier, in 1962 he authored an article for Gleanings In Bee Culture entitled: "Don't Sell Black Bees Short."

Commander Mumford was also a pioneer in amateur radio, building his first radio in 1912 and was an active "ham" for over 70 years with a call sign of "W3CU." He was also a 50-year veteran with the Boy Scouts of America, and was honored with the Silver Beaver award in 1938.

Commander Mumford was a long time member of the Annapolis Civitan Club and the First Presbyterian Church. He married Violet M. Coe in 1927 and was the father of four children. He passed away in 1992 at the age of 93.

Reverend Glenn Clulow served in the U.S. Army in WW II, landed at Omaha Beach, and traveled through Europe. After the war, he entered college in Western Pennsylvania. While there, he rented some land from a beekeeper who noticed Glenn's interest in bees; he gave Glenn the first swarm that emerged. The hive had black roofing paper as the top cover.

That first hive was just the start, for like an addiction, as interest grew, so did the number of hives. Then came more equipment, extractor, and honey tanks and a lifelong interest in bees. However, there came a hiatus when the novice beekeeper felt called to attend Seminary in Maryland. Unable to take his bees with him, the hives were sold, but the equipment was stored. Serving 3 country churches while in Seminary and then 4 years in an inner city church, he was assigned to a parish with much land and the former pastor had left two hives of bees on the property and made a gift to Glenn. These hives multiplied, parishioners donated hives, and swarms were captured. Many beekeepers in the locality became friends, including Commander Mumford. These were all enthusiastic beekeepers who enjoyed getting together, discussing various aspects of beekeeping and eventually started the Association.

At one time, Reverend Clulow served as president of the Maryland State Beekeepers's Association. When Apimondia, the World Beekeeper's Congress, came to the University of Maryland, the Maryland State Beekeepers Association played a big part in the work of the Congress. He also wrote articles for Gleanings in Bee Culture (now Bee Culture) and the American Bee Journal. He passed away in 2007.

Only one of the original group has been continuously active since its inception--Mr. Pete Lisko, from Eastport in Annapolis, MD. Pete is 94 years old. He served as President, his term ending in 1993. For many years was in charge of the Association's Anne Arundel County Fair exhibit. He started helping his father keep bees when he was 10 years old. His hobby was interrupted in 1939 when he entered the U.S. Navy to render distinguished service in WW II; he then completed a 20 year career. His hobby resumed in his sixth year as a Maryland State Park Ranger when he acquired a section of a tree trunk containing a colony of bees. In addition to three Commander Mumford Perpetual Trophies, he has won at least 87 ribbons in local and State competition.

Glenn Clulow’s son, Jon, who lives in Pasadena, served as president from 1994 until 2003. He helped grow the club’s membership, with innovative programs for the regularly scheduled meetings, and mentored dozens of new beekeepers.